This natural bentonite powder fine from Natao comes from Germany. It is a fine powder. Made in Germany. It is not purified, but natural and therefore very valuable.

Bentonite was named after Fort Benton, Montana in the USA. However, the bentonite offered here comes from the deposits in Germany. The mining areas are located in eastern Upper Bavaria and Lower Bavaria. It is a rock with a mixture of different clay minerals.

The most important component is montmorillonite with 60-80 %. It has the ability to absorb water strongly and to swell. It is formed by weathering from volcanic ash. The inner surface of a gram is 400-600 square meter. Normal clay has only an inner surface of 2 square meters. This is the reason why bentonite forms particularly valuable clay-humus complexes. A good addition also to compost!

Bentonite is also used in civil engineering. For example, in waterproofing buildings and even in dike construction. It is also used as a lubricant for driving tunnels and pipes and for vibrating narrow walls. It is also used as a supporting fluid in unsupported boreholes. When geothermal heat is extracted by geothermal probes, the collector tubes in the ground are often surrounded with bentonite. The reason for this is that it binds the water and prevents the formation of cavities during freezing. In addition, there are numerous other possible applications.

Bentonite particles are negatively charged. These properties result in an exceptionally high adsorption capacity of positive substances. Positively charged are, for example, substances which can be harmful and unhealthy for our body. These are among others: Heavy metals, acids, pesticide residues, histamine and even radioactive particles. This means that other substances adhere to the surface of the fine natural bentonite powder of Natao and accumulate there. If it is washed away, it disappears.
variants:
100 g in PE bag or PE can, 250 g in PE bag, 500 g in PE bag, 400 g in PE can, 1000 g in PE can or PE bag. 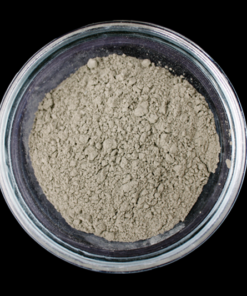